Why Facilitative Leadership is the Key to Engaged Employees 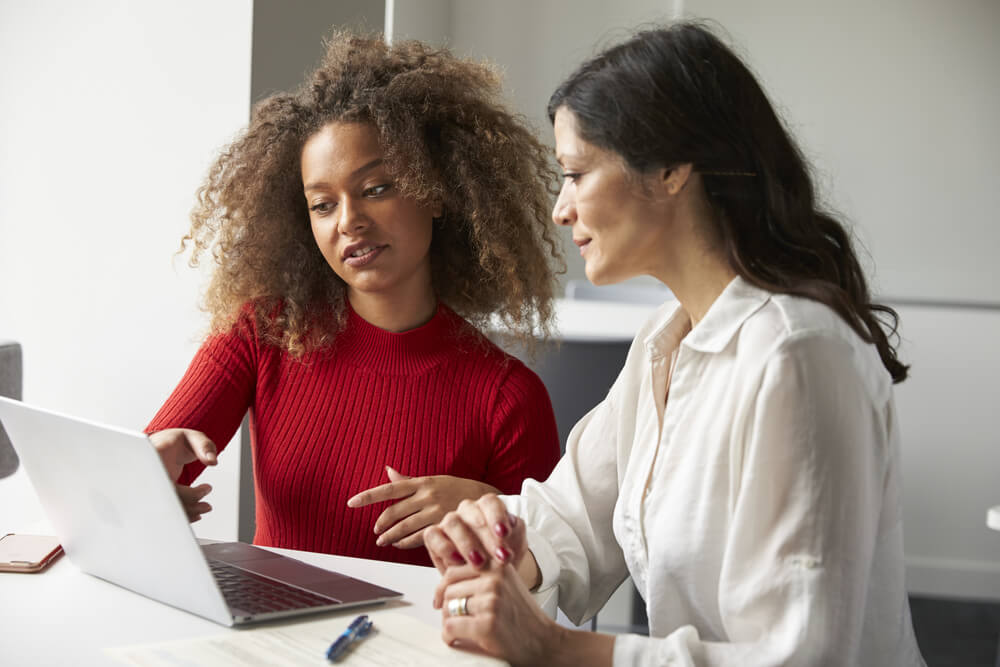 A more dispersed, less hierarchical workforce has given rise to a particular style of management: Facilitative leadership.

Leadership through facilitation guides employees to problem solve and self-manage in pursuit of a common goal, leading to happier and more self-sufficient teams.

It’s simpler and more effective to enact than you think, so read on to learn more about the impacts of facilitative leadership in the workforce. 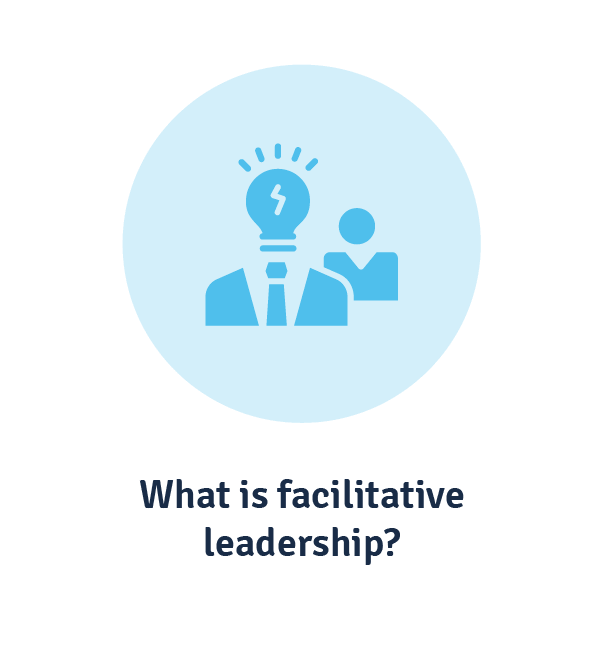 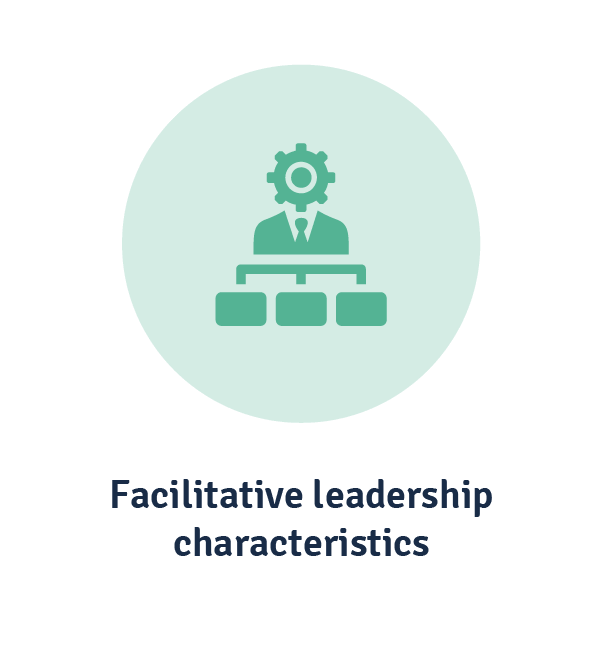 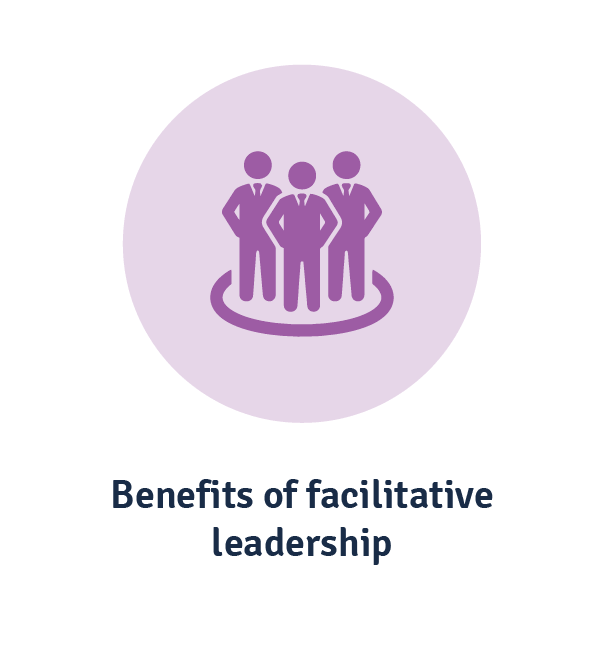 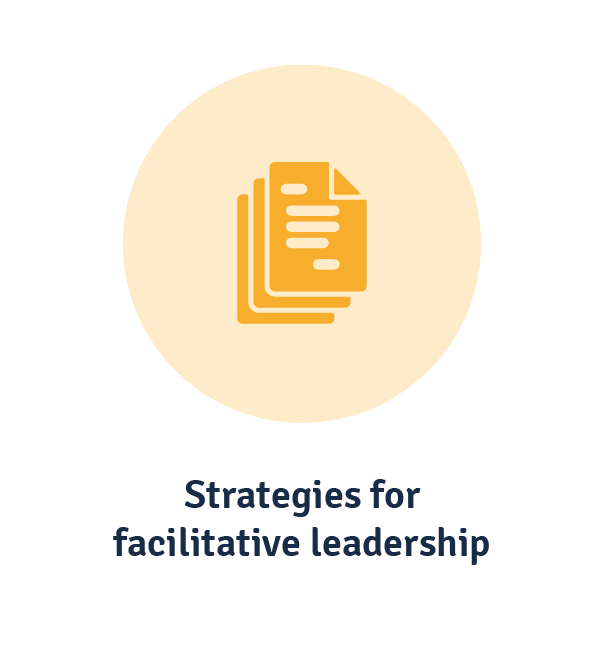 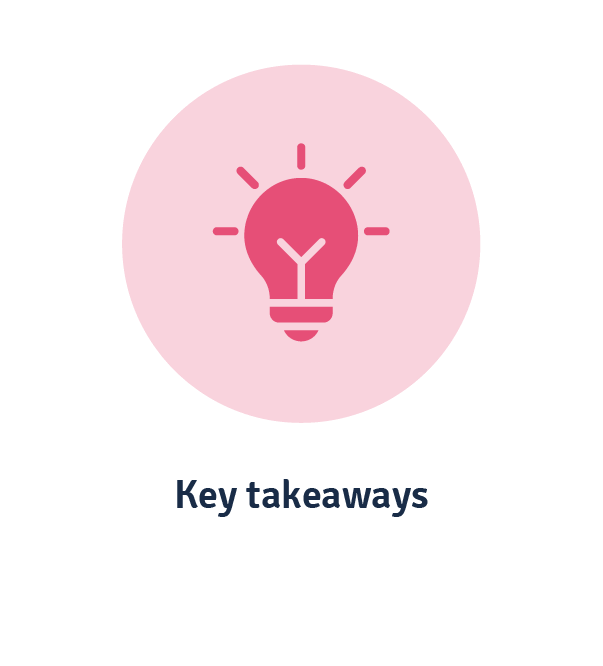 What is facilitative leadership?

A facilitative leadership style focuses on encouraging creative thinking, collective brain storming and minimising conflict amongst employees so they can do more on their own.

Facilitative leaders tend to take a step back from dictating solutions and plans, instead creating a space for employees to manage themselves and their relationships with others.

When to use facilitative leadership

In lean organisations, it’s not uncommon for there to be no department chief. Team leaders are common, but they may still be somewhat in the weeds of work as much as strategy and people management. An authoritative style of leadership probably isn’t going to be the way to outcomes here, least of all because the team leader just won’t have the time to micromanage workloads, and they certainly won’t create a good dynamic in smaller teams where there’s no place to hide. That’s where facilitative leaders shine.

On the other side of the coin, a facilitative leadership style works in large enterprise, too. The leader—potentially a Chief Sales Officer or Chief Revenue Officer in our scenario—still gets final say, but will design inclusive group processes to give more decision making responsibility to their team. It also allows them to focus more on the strategic elements of their executive role, which have the greatest impact on their KPIs anyway.

So, really, there’s no right or wrong environment in which to use a facilitative leadership approach. The point is to provide a common goal and the tools with which to reach it, while giving employees autonomy in everyday work.

What are the characteristics of a facilitative leader?

They still wield strong influence in their teams, which gives you a few characteristics to look out for or hone yourself.

Perhaps the most prominent quality of this leadership style is the ability to emphasise with group members.

Welcoming all contributions means listening without judgement and understanding the perspectives people bring to the table. The emotional intelligence of a facilitative leader is not to be understated; whether they’re realigning a tangential thought or reining in heated discussions, they’re able to do so in an objective and respectful way for the entire group.

Then there’s the fact that every day is a new day for emotions, priorities, workloads, environmental factors and lifestyles. Re-energising team members, re-jigging priorities and keeping everyone’s eyes on the end goal is a day-by-day process that facilitative leaders are adaptable to.

This may be the one leadership style in which the leader asks more questions of their team than their team asks of them.

Facilitative leaders will paraphrase what an employee says to them and ask follow up or clarifying questions for every problem or question asked of them. The purpose is to develop latent critical thinking in employees so they don’t rely on a superior to solve their problems for them.

It’s also about ensuring all participation styles are catered for and all ideas are heard to avoid bias in the group, to role model to the team what behaviours are expected of them.

In saying that facilitative leaders are in tune with the emotional nuances of their environment, they’re also focused on greater team targets.

What are the benefits of facilitative leadership?

It’s not just about being able to read the room. Facilitative leaders create better team dynamics, enable learning in the flow of work and allows all employees to flex their leadership skills.

Unchecked, dissent can sometimes feel like disharmony. A blunt demeanour may clash with someone who censors what they say, which is where a facilitative leader helps in the workplace.

Facilitative leadership encourages respectful communication, especially during debate (which is a fact of work). Because facilitative leaders take a back seat—they’re not leading the debate, just nudging it in the right direction and ensuring everyone can say their piece—the team learns to self-soothe.

Learning in the flow of work

People usually retain information better when there’s a need to learn it. Facilitative leaders harness a need to solve problems and remove themselves from the process by facilitating (duh) learning in the flow of work.

They’ll focus on key capabilities key to an employee’s development, whether that’s through tasks or courses, making documentation easily accessible, or having daily check-ins with their team to spitball issues. All this creates more relevant and impactful learning opportunities.

While a facilitative leader will usually ensure projects don’t go too far off course, mistakes will always be made. But they do so from a place of restraint. Encouraging more collaboration and providing more responsibility in team members creates a more inclusive, open environment that in turn invites employees to give feedback, offer help and own up to misinformed choices.

Facilitative leadership centres on purposeful leadership. These kinds of leaders are agents of change, turning resistance into interdependent team effectiveness.

There’s a school of thought that leadership is a decision, not a position. Rhyming aside, this isn’t just a cliche.

A facilitative leader focus on developing self-sufficient employees. In the vein of learning in the flow of work, this means becoming a thinking partner rather than a thinking replacement. The latter dictates solutions for short-term expediency. But a thinking partner seeks to create long-term behavioural change by:

Standardising workflows and processes also comes under this umbrella. Knowledge bases remove the time wasted by looking for information while simultaneously providing access to help in the moment of need. Josh Bersin, the eminent learning and talent management analyst, advocates for continuous learning through microlearning—short bursts of learning, usually on a learning platform, that are prompted by an everyday roadblock.

Custom bites can be made (either by the leader or with help from an L&D leader), or you can utilise the plethora of existing coursework out there. Either way, technology and systems of productivity play a big role in realising capability development.

The kind of leadership—and the aura around it—present in your organisation will influence the future leaders in your workforce. Authoritative or bureaucratic leaders tells employees they can wield a certain amount of power in getting work done through teams.

Facilitative leadership, on the other hand, gives power to the people. They don’t have an inflated sense of self importance. That’s because command usually leads to compliance, not commitment or belief, in the long run. In that scenario, people aren’t following a leader because they believe in them or buy in to their mission.

Employee enablement provides systems and processes in which said employees are given more responsibility to manage their own performance, thereby boosting their engagement and self-belief. A facilitative leader will often retain final say or sign off for the sake of strategic impact and accountability.

Tactics to facilitate enablement include:

Creating a common goal isn’t necessarily about stretch targets or KPIs. It’s about creating a value proposition for teams, something that a facilitative leader needs to do from their strategic vantage point.

The secret is to build trust. A barrier to trust in interdependent teams? Resistance to change or the unknown.

A good leader will seek to understand the reason for resistance:

Actively sought clarification on what individuals are feeling builds trust. And trust is a key driver of success—especially when employees trust that their leader has their best interests at heart.

For example, a team lead may notice that morale is low for an upcoming project with big business impact. Taking a facilitative leadership approach, they may check in with group members individually—to create a safe environment to air grievances—wherein, they realise the team is behind on other projects and are wary of giving up time on those for the new priority. In a team setting, the lead facilitates conversation on how they can avoid work debt—which leads to the team deciding they’ll break the new project up by responsibilities, so that only the person needed for a certain stage is working on it. The project also won’t be passed on until all the necessary elements are ready for the next stage.

It may not always be this smooth, but it can be that simple.

A facilitative approach, in leadership or otherwise, is about letting the group’s collective expertise come to the forefront. If you’ve hired highly capable people, why not give them the autonomy and responsibility to have an impact?

What facilitative leadership does is create a safe environment and common goals for your employees, making it easier for them to work to their full potential. 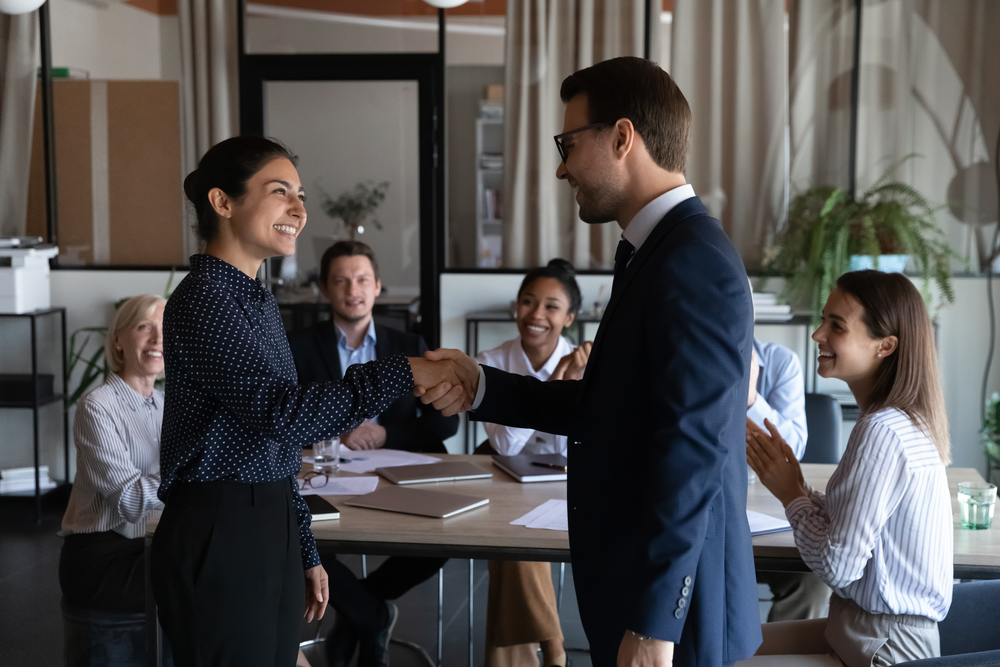 What is Succession Planning and Why Is It Important for Business Strategy?

Succession planning can play a major role in ensuring productivity and workforce planning. Find out more about it and why it’s important… 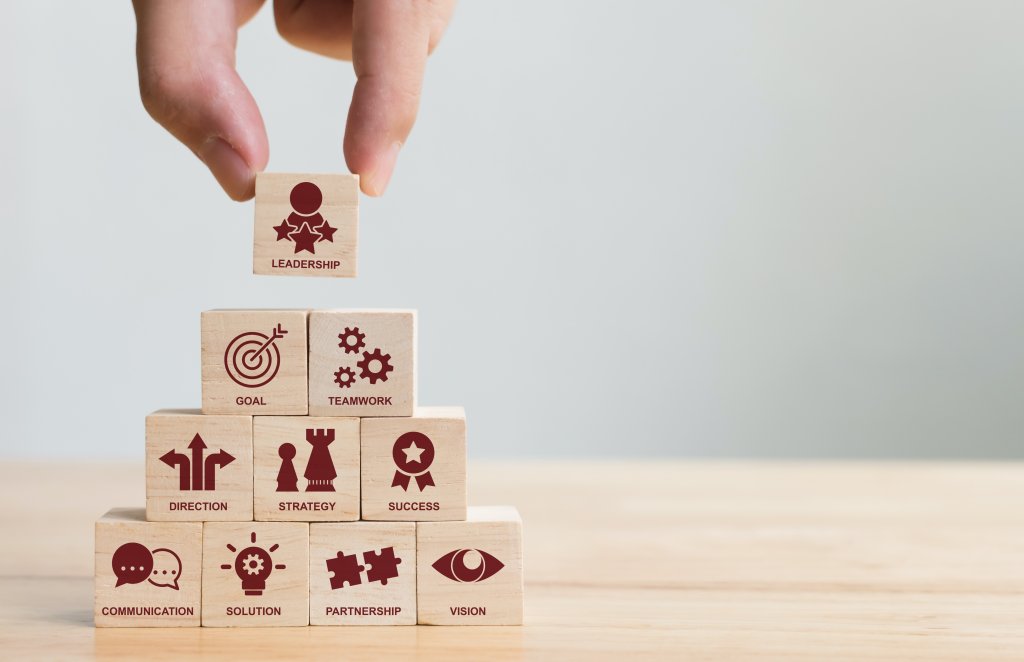 Why You Should Use a Leadership Capability Framework When Developing Leaders

A leadership competency framework is designed to outline the skills, knowledge and abilities required to perform a leadership role… 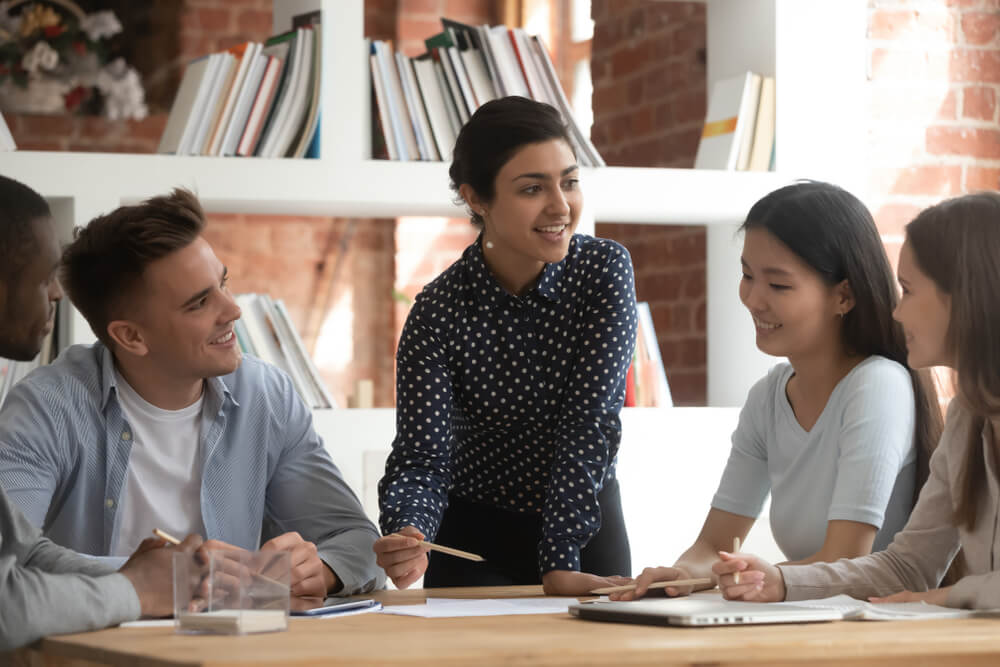 Developing leadership skills is valuable to not only employees, but also your company. Find out why and what the best practices are…